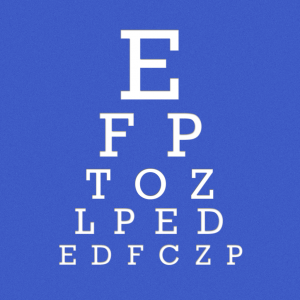 My first app in the app store!

This application is a very handy tool for Optometrists, Opticians and students. The app contains the full setup of the devices used in the OEP 21 points system and also contains the Efron Grading Scales for Contact Lens Complications.

The app was created as a replacement for the paper notes, asked to be made at the HUBrussel where I study the bachelor Optics and Optometry. I often forgot these, so I started wondering if there would be a way to get these on my iPhone, since I never forget my iPhone…

I hope it can help you as much as it does me!

A lot of people are negative about Facebook, Twitter etc. They should all just read this quote and think about the truth in it…

“Social media is bringing back humanity to all digital life. We are no longer users, consumers, shoppers. We are all people again.”

Of course I understand the concerns about privacy and all, but my philosophy is, if you don’t want anyone to know, then don’t put it on the web!

The final presentation of Learning 2.0 with Special Needs

The poster of my thesis can be found here.

The presentation I gave today can be found below.

The first one is a demo of the mockup and the second one of the partly implemented application. Turn up your volume to hear the text-to-speech in the second demo.

You can download the paper “Filling the Digital Divide Gaps in Learning 2.0 with Special Needs” here in .pdf.

For the dilemma for the selection of text and then reading it out loud or the other way around the expert responded that it might be better to choose for first selecting and then reading it loud because in this way it is consistent with other reading applications like Sprint and Kurzweil which some of them already use. For the buttons then it might be a solution when tapped to just read it out loud anyway and also navigate to the page. Facebook does not really have a deep hierarchy of pages so going back to the previous page  is not that difficult in this application.

Some other suggestions were to use sclera pictograms for the statuses with a sub hierarchy, like I feel… and when they select this you go to happy, sad,… The same could be done for some standard texts they could put on the walls of friends like: “I would like to…”, “Let’s go to…”,… Another nice thing would be the possibility to change font and font size, this preference (in the way the person can read it best) is really different from person to person.

The goal of the evaluation was again to see whether the application was usable by people with a mental disability who might think totally different and look different at the world. Things that might seem logic for me could not be logic for then and the other way around! This time the evaluation is with a mockup so it should go better than with the paper prototype.

I gave the iPad with the application open and the first thing that the person did was trying to scroll through the news feed which, because it is a mockup, is not possible yet but it was nice to see that the person with the mental disability knows how to work with iOS devices.

Then I asked to do the different scenario’s:

Then I asked the questions: 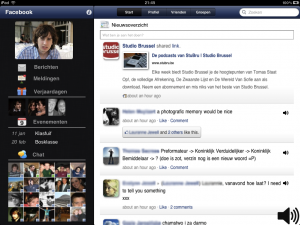 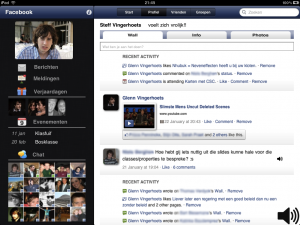 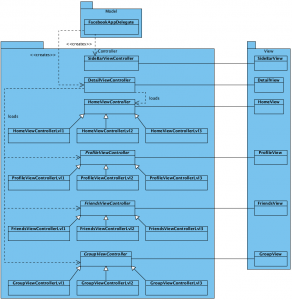