Today I completed my first evaluation of the paper prototype. It took a bit longer than expected because last monday I did not have the time and because I’m in Leuven during the week I couldn’t test on my target users since I can only meet them in the weekends.

The evaluations went quite well and I received a lot of good feedback. Also all participants thought the application was really nice and usefull. These were the scenario’s I asked them to do:

Scenario’s for the parents:

The goal of the evaluation was to see whether the application was usable by:

For the test for the parents I found 5 parents willing to help me age 30-55. There were some general trends that I will shortly talk about:

Some suggestions I received (also for the facebook part I showed to them):

The test for persons with a disability was a little bit disappointing, the problem was that the paper prototype principle wasn’t really that clear for them but the biggest problem was that my paper prototype wasn’t visual enough for them. It was a lot of the same colors, perhaps not a very nice handwriting,… Seeing the difference between what is a button and text, does that represent a picture? And more like that were difficult for them.

For this reason I just did a test with two children without a disability to see whether basic Facebook functionality was still clear. The children had experience with Facebook. Some conclusions:

After three really busy weeks packed with deadlines I was able to finish my new storyboard which shows you part 1 of my thesis. A Facebook application for people with a disability. The first two pages of the storyboard are for the parent or guardian of the person with a disability to set what he or she is able to do.

The third page shows how the standard application will look like if everything is enabled and if it is for a person of “level 1” who can read and understand perfectly but has problems with knowing who to trust or not, what is good online behavior and not,… So the parent will be able to restrict the possibilities of facebook. In that way the parent or guardian does not have to worry about those things anymore. So as you can see most of the things are standard things you can do on facebook but with a slightly different interface but the power of the application will be in the ability to block (changed but more on this later) certain features in the application.

For the people with a disability who have problems with reading but are able to understand (almost) everything there will be like planned in the original application text-to-speech options. The idea is that there will be a speaker like icon where the person can tap on and then select the words or buttons that he/she does not understand and those will then be spoken aloud.

The last category will be the people with a disability who have problems with understanding the words. For them I will try to convert statuses etc. to pictograms but for this I still need more information.

Like already mentioned, there is already a small change to the storyboard for setting the permissions. Now this is an ON-OFF button but my coordinator José pointed out that blocking instead of hiding a certain feature could cause frustration for the person with a disability. He/she might start wondering why he/she is not able to do that and others are,… For that reason it might be better to give the options ON | Hide | Block. So hide will really hide that feature in the app so the person with the disability will not see it exists. Block on the other hand will allow the person to see everything and for example allow to type a new status but when it really wants to commit the action then a prompt will show to type in the parent/guardian password.

Any suggestions and/or comments are much appreciated! 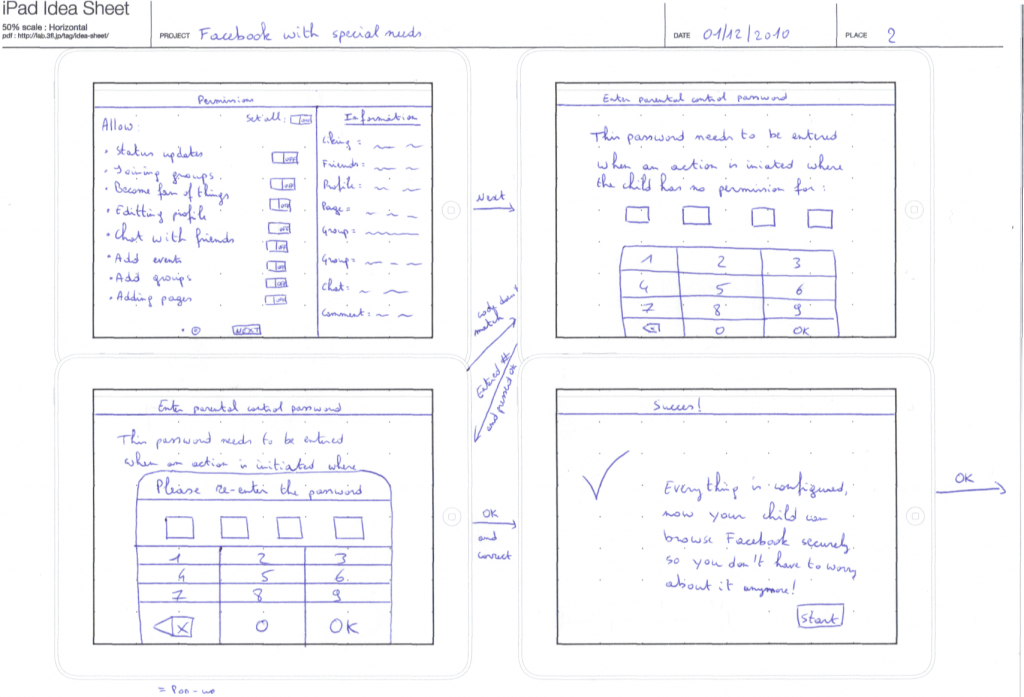 During the last meeting with my coordinator José this thursday we concluded what the application should do: